How Active Is Your Brain After The Head Is Cut-Off?

The group of Netherlands scientists from the Donders Institute for Brain, Cognition and Behaviour have published the results of their latest experiments in regards to debate whether decapitation is a humane method of euthanasia in awake animals. The answer to the main question, how much lab rats suffer when they heads get cut off, was clear. The unpleasant feeling during decapitation lasts for only 4 seconds which makes the whole procedure seamlessly painless. But the strange facts brought up in the experiment perhaps raised series of questions of more mystical nature.

A remarkable and consistent finding is the occurrence of a very slow, large, late wave in the EEG. A relatively long time after cutting the neck, when iso-electricity is already present in the EEG for a considerable time, a large amplitude positive-negative-positive wave follows at approximately 50 seconds after decapitation of rats of the awake group.

It is concluded from this experimental work that consciousness is likely to vanish within some seconds after decapitation. It is therefore implied that decapitation is a quick and not inhumane method of euthanasia. Interestingly, it seems that it takes nearly one minute for neurons to loose their membrane potentials. In view of this finding, a long EEG monitoring during the process of natural dying and basic research regarding the physiology of brain functioning during this process might give information in the ongoing discussion on the definition of brain death, but it is suggested here that the massive wave which can recorded approximately one minute after decapitation ultimately reflects brain death.

Rather out of curiosity, Holland scientists made the EEG on dead rats in couple minutes after the “execution”, and to their own surprise have discovered abnormal electrical impulses in the brain of dead rats. Scientists dubbed the phenomenon the “wave of death”. But neurologist Michel van Putten of the University of Twente in Enschede, the Netherlands, wasn’t convinced. “We have no doubt the observation is real,” he says. “But the interpretation is completely speculative.” The observed brain wave may represent an event on the way to death, but probably isn’t death itself, says clinical neurophysiologist Kevin Nelson of the University of Kentucky in Lexington.

This discovery spoiled the first impression of similar experiences made in George Washington University Medical Faculty in 2009 that recorded the brain activity of seven people dying from critical illnesses. The researchers found identical surges in brain activity moments before death, giving us what may be physiological evidence of  the kind “out of body” experiences my hospice patients used to describe. Moments before death, the patients experienced a burst in brain wave activity, with the spikes occurring at the same time before death and at comparable intensity and duration, leading the researchers to conclude that the patients were having a common experience. 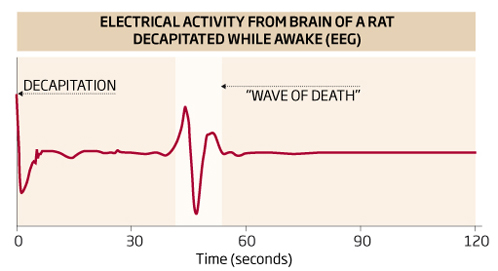 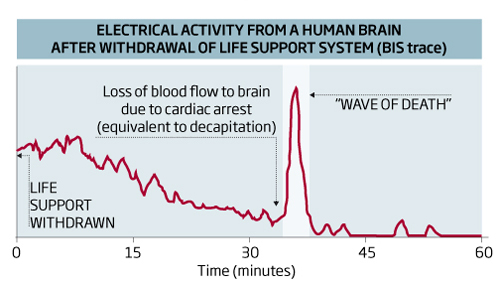 Now it only make sense to suggest that either rats have a soul as humans, or the theory of out-of-body experiences is not consistent. Science doesn’t have an answer, at least no yet.

While Cohen thinks that the appearance of the “wave of death” means that the human brain is dead,  resuscitation scientist Lance Becker sees the wave as the brain making a last attempt to kick start the heart’s pacemaker, perhaps through desperation and panic. Laboratory studies by Lance Becker, MD, professor of emergency medicine at the University of Pennsylvania School of Medicine, in Philadelphia, and colleagues have found that most cells do not die when deprived of oxygen for several hours but rather are killed when oxygen is reintroduced. In his experiences, Becker can bring pigs back to life after 15 minutes of official death without any brain damage.

Is There Light At The End Of The Tunnel?

Kevin Nelson, MD Professor of Neurology, believes near-death experiences are not so uncommon. According to his research, the leading cause of near-death experience is fainting, and upwards of a third of us faint at some time. Some 18 million Americans claim to have had the experience. When it happens, physiological changes in our brains produce strange sensations, of seeing a light at the end of tunnel, of life flashing before our eyes, or perhaps an out-of-body experience. But sense there are direct evidences of death experiences, scientists are not clear on the subject.

We can now establish, that the near-death experience is real and valid, a state to be reckoned with, but we cannot prove or even say with any degree of certainty, what it means, what causes it, or why it occurs, or even what any of this say about an afterlife...

There is a step up in energy at the moment of death, an increase in speed as if you are suddenly vibrating faster than before.., this speed-up is comparable to having lived all your life at a certain radio frequency when all of a sudden someone or something comes long and flips the dial. That flip shifts your to another, higher wavelength. The original frequency where you once existed is still there. It did not change. Everything is still just the same as it was. Only you changed, only you speeded up to allow entry the next radio frequency on the dial.

Once the mind has been exposed to this level of awareness, it can more easily tune it in. Perhaps this accounts for the sudden psi abilities that manifest in those who have had an near-death experience even though they were not prone to such episodes before.

Cut Off Heads Help To Win A Lottery?

The waves of death started to be a subject of scientific experiments with the invention of first holographic recording. Russian researchers Vladimir Nesterov and Yuri Boot, neurosurgeon of Omsk medical institute, were cutting off rats heads as their Holland colleagues but for far more mystical reason.

The base of their experiments was the theory of Hungarian-British Physicist Dennis Gabor, the Nobel laureate in Physics (1971) for his invention and development of the holographic method, that any living creature experiences an increased frequency of brain activity around the time of death.

Nestrov and Boot didn’t have any records of measuring brain waves in rats. They were recording human reactions to this phenomenon. Decapitated rat has been placed between the person forehead (temple)  and the electromagnetic wave generator which supposed to increase the frequency of death waves produced by the brain of a dead animal.

The practical task for people involved in this study was to guess the winning lottery numbers.  Results of this experiment show that results were 3.72 times higher than usual.